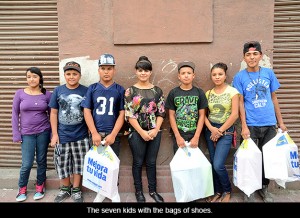 Although Mexico ranks last in the rankings of the 34 Organization for Economic Cooperation and Development (OECD) countries in terms of educational achievement and although it has a much higher level of poverty than the U.S., public education isn't free. Santa Feans Jim and Pat Noble and their powerful team of volunteers not only manage an orphanage in Palomas, Mexico – La Casa de Amor Para Niños – but they have also raised scholarships for some 300 youngsters there. The cost which includes the subscription fee, uniforms, shoes, a backpack for carrying books and school supplies is $150 per year for elementary school, $250 for middle school and $500 for each of the three years of high school. This is a staggering barrier for the many extremely poor families living along the border.

Recently, I tried to do my share in the Juárez area by helping several kids I know from my work at the mental asylum, Vision in Action. I told them that I would buy them the shoes and tennies they needed for school if they would each write a three page essay about their lives, struggles, aspirations and plans for the future. I'm not an educator but I believe that having some goal for your future gives your school experience some meaning. Many American kids – so pampered compared to these young Mexicans – seem to have no goals. No wonder, therefore, that school has little meaning to them. In addition, I wanted these kids to earn their shoes and tennies; I didn’t want this to be just a gift.

The kids followed through beautifully. Here are some of their comments. Ángel who is fifteen said that his father started working at the asylum when he, Ángel was only two and that when he was six, he began helping his father with tasks like cutting the hair of and shaving the patients. When Benito, one of the patients, had a bi-polar attack and had to be kept in a cell, Ángel would bring him food.

Yeira described how she and Hector would search their barrio for scrap metal, then sell it along the highway or cruise the barrio with a baby carriage, looking for chunks of plywood to heat their home.

Daniel wrote about growing up with a schizophrenic mother. He now lives at the asylum and works there when he isn't in school, together with Ángel and Yeira's brother, Hector.

As a result, I agreed to meet them at Vision in Action which is located in the desert o the west edge of Juárez at 9 AM, Saturday, August 2. Why a mental asylum? Because Daniel, one of the boys lives there with his mother who is a patient. Others work there – Ángel, Braulio and Hector. Rubí is the daughter-in-law of an employee and Alejandra is the daughter of a patient. Hector and Yeira are the grandchildren of a woman named Elvira Romero who was the cook at the asylum for many years. Believe it or not, this asylum with its 100 or so patients and its charismatic leader, Pastor José Antonio Galván, is as close to a home as these young kids have ever known.

Our small caravan finally got started at 11 a.m. with Rubí's husband, "El Pollito" (the Little Chicken) leading the way in an old van. There were sixteen of us in all – the seven kids, three mothers, three younger children of one of the mothers, Pollito (a friend of mine from Colorado who had come to see the asylum) and me. Until very recently Juárez was the most dangerous city in the world and not a place to be driving a car with New Mexico plates, so I just followed Pollito and hoped for the best.

He led us first to a beautiful Costco where a capable young man named Reyes sold me a membership and also pointed out that he had briefly lived with grandparents near the Colorado town where I had once lived. But Costco's collection of shoes was almost non-existent so we exited past a heavily armed woman police officer and headed into the center of the town. Extensive renovations are going on here: one major street has been replaced by a pedestrian walkway and the area was crowded with shoppers. This is a huge change from just a few years ago when people simply didn't go out in crowds.

Finally we found a store named Coppel that both had a good selection and would take a credit card. Then the three mothers earned their keep by getting the kids to focus on the shoes and make decisions. Time just disappears when you're involved in a project like this, but finally I was standing in front of a surprised-looking cashier with this huge stack of 14 boxes. The manager agreed to a ten percent discount and soon we were headed back to our vehicles, mission accomplished.

The goal of getting these kids ready for school was a practical one. There were surprises, however. Hector, almost seventeen and the oldest of the seven, confided to me afterwards that he had never before gone into a store to buy clothing. His clothing had always been used clothing bought at the local "segundos" or flea markets. And seeing the life and vitality in downtown Juárez – a ghost town only a few years ago – was an enormous surprise.

This is a project that keeps evolving, however. I started with three kids and ended up with seven. We started with an agreement to buy a pair of shoes but ended up with both shoes and tennies. So the subject of uniforms will soon resurface, "uniform" meaning not only something for school wear but clothing for sports as well. I better be ready.
2014-08-13 21:56:50