All News
From tourism to mobile phones, the end of the Cuban cold war could be good news for U.S. corporations by David Millward, U.S. Correspondent, The Telegraph United Airlines plans flights to Havana 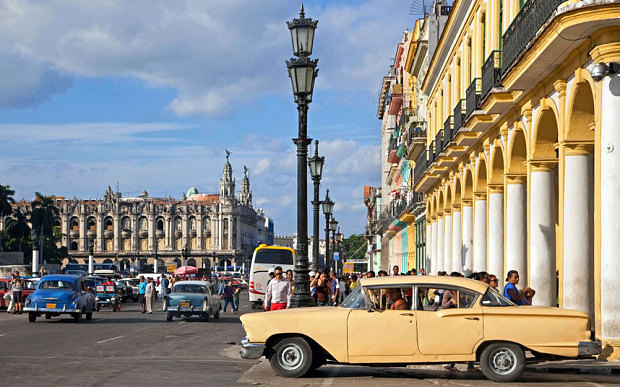 United Airlines has announced it will operate flights to Cuba following President Obama’s relaxation of restrictions dating back 52 years. The move by the airline, which will run flights from Houston, Texas and Newark, New Jersey, is evidence that companies are preparing for what they hope will be a commercial bonanza. Much, however, will depend on the extent to which Cuba is prepared to open up its economy to the U.S. and willingness of the Republican-controlled congress to lift the trade restrictions. That could still prove problematic given the hostile reception Republicans gave to the initiative when it was announced by President Obama. “I think the first industry to benefit will be agriculture,” said Rob Sequin, owner and publisher of the Havana Journal, a website containing information about trade and business with the island. “It is already legal for American companies to sell agricultural products and there is a sales network in place.” Already a newly formed group, the U.S. Agriculture Coalition for Cuba, comprising more than 30 firms, intends to lobby congress in support of easing trade restrictions. “We have the momentum we’re carrying it forward,” said Paul Johnson, the group’s vice chairmen. Experts also believe banking will benefit, especially with new rules making it possible for Americans to use credit cards in Cuba. The easing of restrictions should see an upturn in trade between the U.S. which, according to the U.S.-Cuba Trade and Economic Council, had fallen dramatically from a peak of $710 million (£467 million) to $349 million last year. American corporations have been keen to see the five-decade embargo brought to a close, according to Jodi Bond, vice president of the Americas for the International Division at the U.S. Chamber of Commerce. "The business community has been against the embargo for quite some time," she said. "You'll be hearing more and more from companies soon." Some analysts believe that American companies could also benefit if Cuba chooses to modernize its creaking infrastructure. This would be good news for construction and telecommunications firms in particular. Cuba does have a mobile phone network, but compared with other countries – including poverty-ridden Haiti – it is primitive and expensive. The internet is also painfully slow and access restricted. According to one recent study only 3.4 percent of Cuban homes are online. The potential for U.S. companies to win contracts to modernize the network is obvious. But some have argued that Havana could have done this with European trading partners already if it had identified it as a priority. The other potential big winner is likely to be the travel industry. Even though travel to Cuba purely as a tourist remains restricted, some of the bureaucracy involved in taking a trip to the island has been eased.
2015-01-20 20:28:15